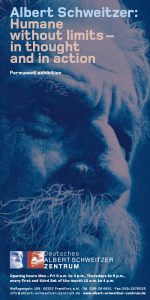 Albert Schweitzer: Humane without limits – in thought and in action

Albert Schweitzer is one of the most significant personalities of the 20th Century. As theologian, musician and philosopher he created groundbreaking scientific works. In addition he became a world renowned organist and interpreter of J.S. Bach.

Following his vow to serve those in need, Schweitzer became a doctor of medicine. He then founded and built a hospital in Gabun, Africa which still exists today. He introduced and justified a universally valid ethics of responsibility for all forms of life. Even in his old age, he worked tirelessly to promote nuclear disarmament and peace around the world.

Schweitzer’s theory and practice, thinking and actions form a credible unity. In light of the omnipresent threat to creation his message to humanity is noteworthier than ever.

Albert Schweitzer led a moved and moving life between the continents. Crossing borders and boundaries characterized not only his unusual decision to give up his dual career as professor and musician to study medicine and found a hospital in equatorial Africa. Crossing boundaries also corresponds to the very core of his thinking: In theology he tread new paths with his interpretation of the historical Jesus as an ethical personality; in music he tread new paths with his interpretations of Bach and finally his philosophical thought is a fundamentally new approach to ethics in itself. His universally valid ethics of reverence for all forms of life, places each and every one of us into a limitless responsibility.

This essential trait of crossing borders and moving between continents is represented in Schweitzer’s suitcase as the symbolic object in the center of our exhibition. It invites visitors to set off on a journey to explore and understand Albert Schweitzer’s life and thought, first with a biographical overview and then at eight different thematic sections.

Aside from presentations and information about Albert Schweitzer, visitors are offered interactive ways of meeting Albert Schweitzer: photos, originals of his publications and sound experiences offer a personal encounter with Schweitzer’s life and work.

This is facilitated by listening stations with original recordings of Schweitzer’s organ concerts or lectures, excerpts from his life and thinking in film and sound samples. Furthermore, interactive stations offer the opportunity to examine and discuss basic approaches of his ethics and their relevance for the present day.

Numerous showcases from our exclusive collection present original text and photographic documents for the very first time, all of them illustrating stations and stages in Schweitzer’s thinking and activities.

Finally, board games, cross-word puzzles and a computer-quiz help consolidate what has been learned and experienced in this exhibition.

“You cannot imagine, how happy I am, to let you hear Bach in the deepened interpretation I attained in the solitude of Africa.”

Already as a child Albert Schweitzer substituted the organist in his home church in Günsbach. After taking lessons first from Eugen and Ernst Münch and later from the Parisian organ virtuoso Charles Marie Widor, Schweitzer himself became one of the greatest organists of his time.

Albert Schweitzer created a totally new interpretation of J.S. Bach’s oeuvre. He sees in it ”…the emotional and the figurative… represented with…the greatest possible vividness and distinctness”.

Aside from playing the organ, Albert Schweitzer also concerned himself with the construction of organs. Throughout Europe he soon became a renowned expert for the renovation of old organs or the construction of new ones. His numerous organ concerts helped finance a great part of his hospital in Lambarene, Gabon.

“That, which is important, is that the spirit of Jesus enters the world and becomes powerful in it as a spirit of understanding and love.”

His professional wish to become a minister like his father became obvious when he began his studies of theology. After his theological exams he served as vicar at St. Nicolai in Strasburg. Simultaneously he continued his academic studies concentrating on the historical Jesus. Through – out all his research interests, his Sunday sermons remained at the core of his commitment. Being humane – in the sense of Jesus – is decisive in Schweitzer’s understanding of religion and belief. He was dedicated to the “idea of free, creative design and expression of Christian belief”. Not submission to dogma but “devotion to the love of Jesus” was central to him. Being Christian must prove itself in active charity, which grows out of the „community of will with Jesus”. In the helping devotion to fellow human beings and fellow creatures we turn into “co-workers” for the kingdom of God.

Helene Schweitzer, his “most loyal comrade”

“Together we want to live for something.”

“Without her, nothing would ever have become of my plans”- with these words Albert Schweitzer honored the importance of his wife Helene when looking back to the founding of his hospital. Born on Feb 25, 1879 in Berlin as the daughter of the respected professor of history, Dr. Harry Bresslau, Helene’s education soon displayed her many talents and profound humanitarian mindset: following her teacher’s exam and studies in music and art history, she cared for orphans in Strasburg and as a social worker co-founded a home for mothers-to-be in need.

Since 1898 she had been friends with Albert Schweitzer, whose commitment to a pronounced responsibility towards the poor and disadvantaged she shared. This is reflected in her active correspondence with Schweitzer. Working together with her husband, Helene came to be of invaluable help in the editing of his sermons and manuscripts. In June of 1912 the long-expected wedding was celebrated with parents and friends.

Hospital founder and physician in Lambarene

“A physician I wanted to be, to be able to help without words.”

The theology professor and preacher Albert Schweitzer no longer wanted to merely talk of the “religion of love” but wanted to realize it in practice. After some detours he took cognizance of the call of the Parisian missionary society which was urgently looking for physicians for the French colony in Gabon, Africa.

So Schweitzer decided to study medicine which he completed between 1905 and 1911. During this time, he continued teaching theology at the university, continued his ministry, wrote voluminous books on the life of Jesus and Bach, and continued his organ concerts. After his exams and a practical year at the clinic he was awarded his medical doctorate with his thesis “The psychiatric assessment of Jesus”. Shortly thereafter, accompanied by his wife Helene, he began his first long journey to Africa with 70 boxes of medical and household supplies as basic resources. He financed this initial equipment through donations by friends and colleagues as well as from the remuneration for his organ concerts and lectures.

Building and rebuilding the hospital three times between 1913 and 1927

In the fall of 1913, the chicken coop used as a treatment room was replaced by a corrugated iron hut by the banks of the Ogowe river. Larger bamboo huts as housing for the patients followed. In all the construction work to enlarge the hospital Schweitzer was architect and foreman in one.

During WWI Albert and Helene Schweitzer, being Germans, were considered enemies in the French colony of Gabon and were therefore held captive in France from 1917 to 1918. In the early 20s, Schweitzer succeeded in raising new funds for his return to Lambarene through concerts and lectures especially in Sweden.

In the spring of 1924 Schweitzer came back to Lambarene to rebuild the meanwhile destroyed hospital once again. The number of patients multiplied necessitating the building of yet another hospital in 1925 about 2 miles upstream of the Ogowe, this time with sturdier corrugated-iron houses. Around the new, by now third hospital, Schweitzer planted a garden to help with the ever scarce food supply.

“The work of Doctor Albert Schweitzer will not die!”

An ever-growing hospital village: Lambarene from 1929 until today

The years between 1929 and Schweitzer’s death in 1965 were marked by twelve more stays in Africa, interrupted mostly for concert tours in Europe which helped finance the hospital. The ever increasing number of patients demanded a continuous expansion of the hospital: under his supervision it had grown to 70 buildings by 1965. It included among other things a baby and infant ward and a village for leprosy patients. Shortly before his death he passed the administrative responsibility to his daughter Rhena, the medical responsibility to Dr. Walter Munz.

In 1975 the pending closing of the hospital due to lack of funds was prevented just in time. With the support of the state of Gabon a completely new clinic was finally built, meeting modern European standards. Lambarene today is managed by an international trustee foundation and supported by donations proportionately by the state of Gabon and among others by the DHAS Frankfurt.

“True culture is something spiritual and ethical, namely the finest and deepest humaneness.”

Since the turn of the 20th Century Albert Schweitzer became increasingly concerned about the overall cultural developments in Europe. According to Schweitzer scientific and technological progress coincided with an increasing lack of humaneness; he spoke of a “decay of culture” which to him escalated in the catastrophe of the first World War.

His intellectual striving and ambition aimed at the “rebuilding of culture”. Not material wellbeing but „the spiritual well-being of the many, the whole” should be decisive. “Ethical progress therefore is the essential and the unequivocal of cultural development, material progress the less essential and even questionable part.” But how can culture renew itself?

Founder of a universal ethics

“I appeal to mankind to live an ethics of the reverence for life. This ethics does not distinguish between valuable and less valuable, higher or lower forms of life.” In his book “From my life and thought”

Schweitzer tells of his long and difficult search for a basic concept of “a sustainable, deeper and more vivid ethical culture”. This should not only be valid for the relationship to fellow human beings, but include all living beings. In 1925, having tirelessly turned the problem of a foundation for all ethics over in his mind for weeks, Schweitzer experienced a revelatory moment while riding a boat on the Ogowe river. Suddenly the term “reverence for life” occurred to him as the key insight for his ethics. He realized at once that this term implies an ethics which leaves behind everything that had been formulated before. This ethics does not limit itself to the relationship to fellow human beings, but includes all forms of life.

The idea of solidarity and communion with all living creatures generates a “spiritual and intellectual relationship to the universe”.

“I profess to the conviction that we will solve the problem of peace only if we reject war on the basis of a single reason, namely because war incurs the guilt of inhumaneness.”

In his appeal for peace the 80-year-old Schweitzer not only strongly warned against nuclear war. He ostracized all military armed violence as a means of politics: “The goal we must focus on from now into all future, must be that the decision in case of severe conflict, separating peoples, can no longer be left to war, but must be found peacefully.”

For his global and spirited commitment for peace and understanding Schweitzer received numerous awards – among them the peace prize of the German Book Trade in 1951, as well as the Nobel prize for Peace in 1952, which he accepted in Oslo in 1954.

“Frankfurt immediately exerted a special magic on me.”

Albert Schweitzer visited Frankfurt more than 20 times for concerts, lectures and awards. A special occasion was the awarding of the Goethe prize at the Goethe house on August 28, 1928, the award allowed him to build a house in his hometown of Günsbach.

During the Second World War Schweitzer stayed away from Germany. He revisited Frankfurt only on September 16, 1951 when being awarded the peace prize of the German Book Trade.

In the same year a school was named after him and also the largest residential area in Frankfurt-Eschersheim, built after the war, bears his name.

On October 9, 1959 Albert Schweitzer was bestowed the honorary citizenship of the city of Frankfurt.